California’s compulsory education laws require children between six and eighteen years of age to attend school, with a limited number of specified exceptions. Under state law, a pupil who, without a valid excuse, is absent from school for three full days in one school year, or is tardy or absent for more than 30 minutes during the school day on three occasions in one school year, is considered truant.

Once a student is designated a truant, state law requires schools, districts, counties, and courts to intervene to ensure that parents and pupils receive specific services to assist them in complying with attendance laws. When these interventions fail—meaning parents or guardians still do not send a child to school or a student misses an unlawful amount of school—the matter is referred to the courts. Courts can then use penalties or other measures to seek compliance.

Essentially, these interventions ensure that pupils remain in school and that a pattern is not established that could lead to their dropping out of school later in their educational career.

When A Truancy is Reported

The school must: (1) report the truant pupil to the district’s attendance supervisor, (2) notify the parent or guardian that the pupil is truant, and (3) provide the pupil and parent with certain interventions—such as providing the pupil with counseling and tutoring and requiring the parent to attend a parenting class.

If the school-level interventions are unsuccessful, the school district will refer the student and the parent to the district’s SARB or, if the district does not have a standing SARB, to the county office of education’s (COE) SARB. In either case, the SARB is composed of parents, representatives from the school district, and members of the community at large—including representatives from law enforcement, welfare and mental health agencies, youth services agencies, and the district attorney’s office. The SARB members work collaboratively to diagnose the problem and recommend solutions to overcome the specific circumstances that are contributing to truancy. If parents refuse to respond to SARB directives, the SARB may refer the case to the district attorney for legal interventions. Alternatively, school districts may bypass the district attorney’s office entirely and file against offenders in traffic court.

In addition to a SARB, most COEs operate formal truancy mediation programs in coordination with the district attorney and/or county probation offices. A SARB may refer cases to these programs as a last intervention before the pupil or parent faces legal prosecution. Typically, it is only in the most egregious cases where these efforts are unsuccessful and legal action is subsequently pursued by the district attorney. When legal action is needed, district attorneys have three options they may use to prosecute offenders. As described in Figure 1, the penalties associated with these options vary in severity—ranging from community service or participation in a parent education program to one year in jail and a $2,000 fine. 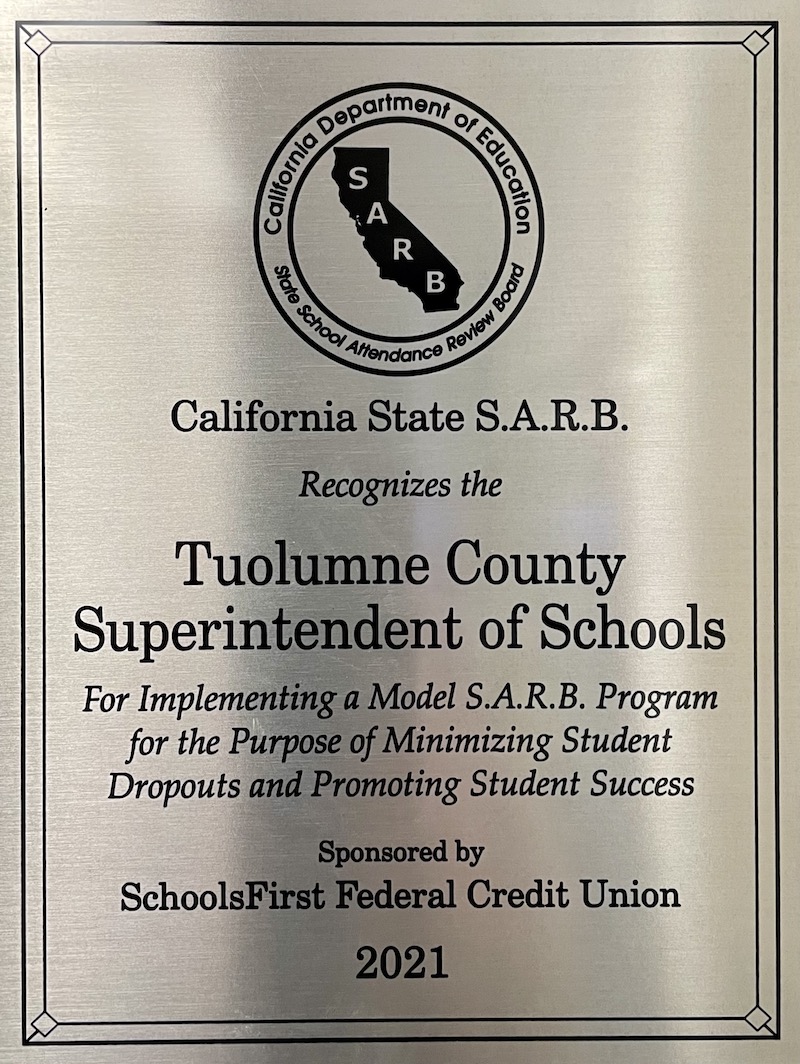 In April of 2021, State Superintendent Tony Thurmond announced that the Tuolumne County Superintendent Schools Office has been recognized as a Model School Attendance Review Board (SARB) program.

All hearings occur at the Tuolumne County Superintendent of Schools Office, Room 217, on the second Wednesday of the month. There are two SARB Hearings in September and May. Hearings are 8 AM to 12 PM.

Please confirm deletion. There is no undo!